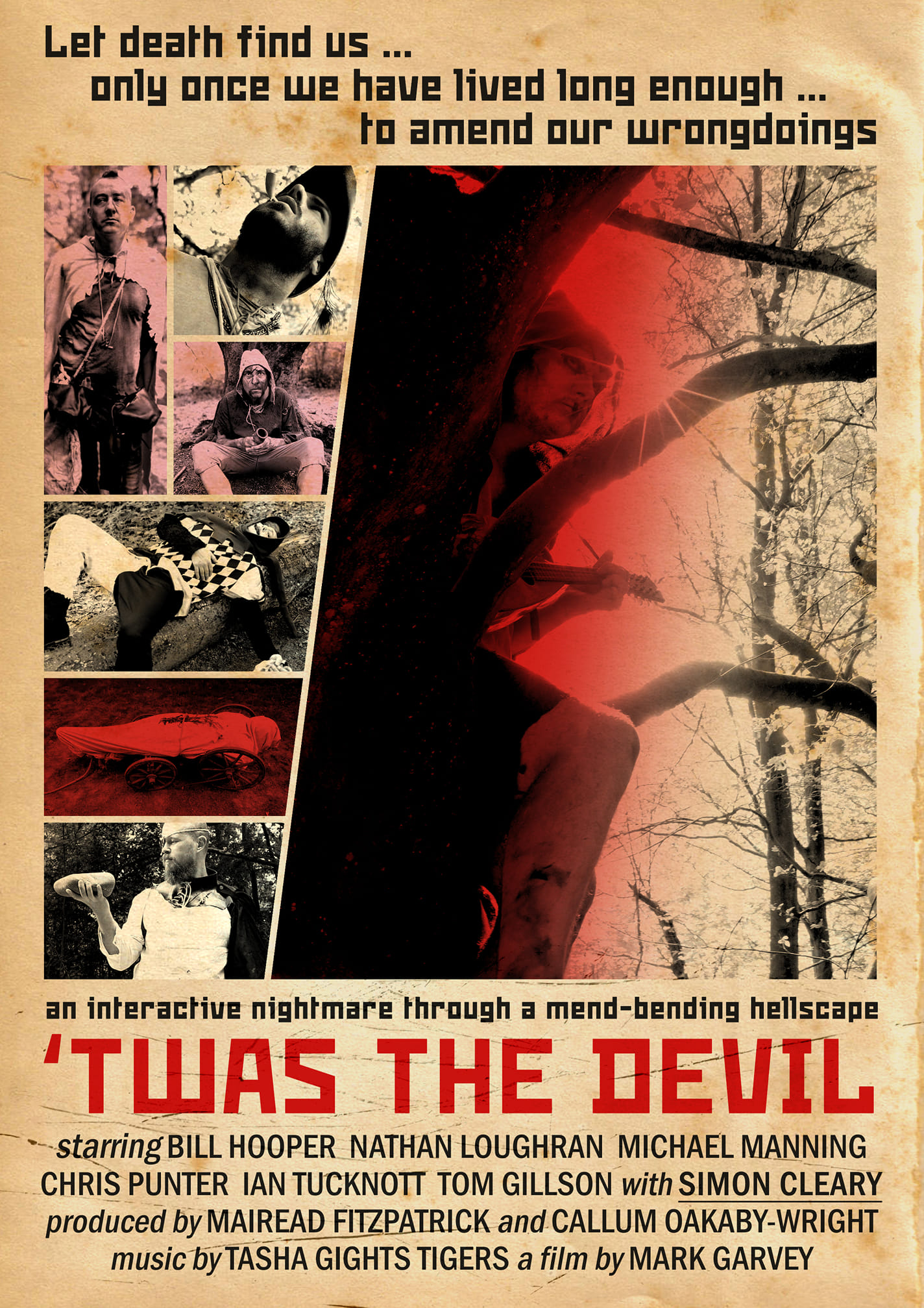 “See, that’s the difference between you and me, and why you live here and I’m just passing

Set in England’s dark past, Zachary (Simon Cleary), desperately hauls his wife’s corpse towards her final resting place. You – the viewer – guide Zachary and make choices along his journey, as he encounters a host of deranged locals through a mind-bending landscape in a unique interactive experiment in digital storytelling.’Twas the Devil is a feature-length interactive “choose-your-own-folktale” experiment in digital storytelling with multiple endings.

Zachary is on a journey to give his wife a proper burial. Along the way he collides with many beings and spirits. All of them have the intent of leading him in another direction. This film has over 50 different outcomes. This is a one of a kind independent feature film. The time, effort, and pre production had to be in precise alignment to pull off such a great film.

The offer’s tempting to Bobby who would later have his cache of loan money destroyed (in a
random event I do not want to spoil), but he’s still not sure. While he waits for his car and
ponders the offer, he must also deal with the local constable, Sheriff Potter, who has his watchful
eye on Bobby, and a jealous young thug, Toby N. Tucker a.k.a. “TNT,” who thinks Bobby’s try
to steal Jenny, his underage girlfriend. After he fails to kill Grace and instead has sex with her,
she tells him about a large sum of money that Jake has hidden away, that could be theirs if he’ll
kill her husband. Feeling pressure from the gangsters and desperately wanting to get out of this
strange town, Bobby must decide who, if anyone, he’ll kill for the money to get his car and leave.
However, the stakes are much higher…

Giving credit where credit is due, director Oliver Stone is a master of creating disgusting
characters and getting the right actors to play them; such as, Tommy Lee Jones as Warden
McCluskey in Natural Born Killers. Billy Bob Thornton’s role as the car mechanic, who more or
less resembles a walking oil spill, was damn annoying but funny. Frankly, I admire Bobby’s
patience for not choking him to death! Speaking of Bobby, Sean Penn is adequate as the lead, a
sleazy-but-sane man stuck in a town full of lunatics, yet try as he might, Penn simply can’t make
his character interesting nor likeable. The same goes for the somewhat miscast Jennifer Lopez
(the sole female in the core cast) as the femme fatale Grace, a role that asks little of her beyond
looking drop-dead gorgeous; even though she’s depicted for most of her screen time as being a
bit more sinister beyond her sultry façade. Chewing up much of the Arizona scenery is the
always reliable Nick Nolte as her Grace’s monstrous husband, who relishes his role with a
gravelly drawl and a morally bankrupt smirk. Rounding out the core cast is the late great Powers

Boothe as the seemingly normal town sheriff, rising star Joaquin Phoenix as the deranged local
boy, who are quite excellent, if not sorely underutilized in their all too brief supporting roles.

On the downside of things, the film at its core is an aimless and intensely gritty piece of work
that takes after the aforementioned Natural Born Killers and doesn’t really claim to be about
anything in particular. Even fans of the former didn’t care for this one because they felt its
aimlessness was more of an excuse for Stone to indulge in some pretty over the top filmmaking
styles (undercranking, rapid-fire cutaways, different film stocks, jarring camera angles, etc.) and
plot choices for the sake of it. From the over-the-top acting of Jon Voight spewing pseudo
philosophical dialogue in the same, horrible accent he used in Anaconda, to the endlessly
meandering storyline that can’t seem to pick which plot to follow through with, this movie has a
style that relies on ripping off the visual styles of David Lynch, Quentin Tarantino and Terry
Gilliam. Oh, and making plot inconveniences overly convenient isn’t that cool. Actually, it’s
pretty annoying and lazy in contrast to everything else. Perhaps the book that serves as the film’s
basis, Stray Dogs by novelist/screenwriter John Ridley (who aside from writing this film’s
screenplay, would later go on to pen the Academy Award-winning screenplay for 12 Years A
Slave), connects the dots a bit better than its big screen counterpart that relies heavily upon
interesting character exaggerations, but chokes under the weight of Ennio Morricone’s
wonderful, yet overbearing musical score and Oliver Stone’s overly splashy style.

Also, on a random albeit personal aside, there was not one redeeming quality in the lead
“protagonist”, nor any other character for that matter. The plot was just everything going wrong
and everyone being an asshole to even more hapless asshole. If only Bobby would’ve had a gun,
that would’ve changed the entire direction of the story.

Join us down the rabbit hole for our Creative series on our ELIME Podcast aimed at sharing knowledge and experience. We focus on subculture, art, Urban Detective, music, film, storytelling and more!